Following on from my post about yoga a couple of days ago, I’ve been musing about that attractive concept of “Karma”. At least I find it attractive – believing myself to be fundamentally nice, kind,honest and helpful I beleive(d) that my karma would be good, and some people who have hurt me, or wronged me would, at some point get their just “comeuppance” Very satisfying, natural justice delivered by some all seeing deity or force of nature …. And then I discover that the philosophy of yoga incorporates this universal spiritual concept of reaping what you sow: the law of Karma.

Since I’ve been looking into this a bit more, well it’s not quite as simple as my atavistic vision of (essentially) hell and purgatory for the bad, and heaven for the good …

Yes, simply put, Karma is the future consequence of one’s current behaviour, but not JUST your Behaviour- also your  intentions, thoughts,  and actions. Hmm, so all those angry thoughts also get weighed up on the giant karmic scales ? There is also the slightly sticky thought that a big chunk of your karma comes from how you behaved in previous lives (for faiths that beleive in reincarnation) which you will neither remember not be able to add to your internal karmic scales … Meaning our lives are controlled completely by our own self-created karma; the actions we do in this lifetime, (as well as what we have done in all our previous lifetimes, which are many in number). However, much of our karmic influences lie hidden in the subconscious part of our minds, which is where all our karmic actions are recorded. So it’s past lives and subconscious thoughts that are the main influences  …. Hmm , the theory goes that these actions, or karma, determine what happens in our lives today, especially as these actions have been repeated over many lifetimes.

So if all of our actions, both current and past, determine what happens in our lives today, this also means that if we act now in ways to improve our life, those actions will have an influence as we move forward. Our so called destiny is of our own making, and we can influence how life turns out for us – quitting drinking anyone ? Is life better now as a result of our sobriety ? I say yes.  Is this karma ? No idea

So, while the Karma you currently create (with your thoughts, actions intentions and behaviour) influences your future life experiences, (the theory goes) your Karma is not your fate.

It’s central to the idea of karma that one has the ability to consciously choose how you respond and react to Karmic generated events, thus reducing the current impact of your Karma and reducing or eliminating future Karma. Got that?

This is what yoga is supposed to do –  free  you from the accumulation of more Karma, good and bad. Good Karma is good, bad Karma is bad, but attaining any kind of Karma is undesirable. The goal, through the practice of yoga, is to stop the cycle of Karma by ceasing further Karmic accumulation. The yogis tell us the only way to not produce Karma is to act selflessly, without ego, without the desire for any reward. Yoga , and the meditation involved helps us to achieve this goal..

The more conscious we are about how we live our lives and the choices we make, the more we will be able to guide our lives in a particular way. But it is only when we begin to choose the spiritual life that we finally find the fulfillment and happiness we have sought in all of our previous lifetimes.

Like yoga, this is both a psychological and physical practice, with the mental attitude much more powerful than the physical deed.

Liberation from Karma is known as Nirvana, and is a highly esteemed spiritual state. But striving to attain a state of Nirvana is not a necessary goal; any reduction in Karma will improve one’s life, well-being and happiness. So, doing yoga will reduce your karma, good and bad … And mean you are closer to Nirvana …?.

I want to believe this – like I said I find the idea attractive, and of course it means that we can and should let go of negative thoughts, feelings and emotions, which is better for us however you look at it… However I’m really not sure I’m getting the connection between an unsupported half moon and a better life.

I probably need to study some more ! But I do like this below ? You see what I have learned is that the first image is, in itself bad karma – because it is associated with mean thoughts …. Can’t help thinking the world might be a better place if met people adopted this kind of philosophy … 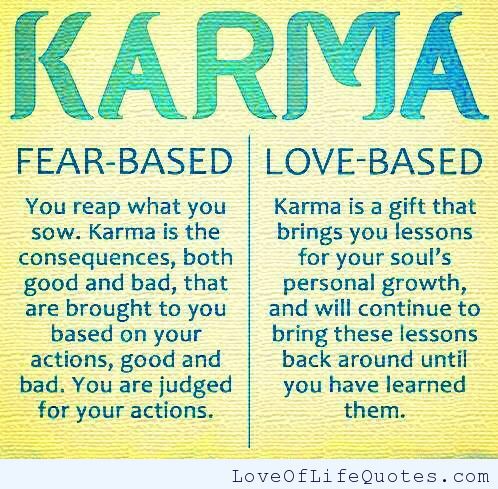