This quote, from Mahatma Gandhi, struck me as particularly apt at this present time. Somehow I have come to the place when I am reviewing the value of my “feelings” and the impact that they, perhaps as opposed to my thoughts, bring to my life.

I have always ‘felt’ things very intensely. This has been both a blessing and a curse. At times, the passion that I have felt has driven me to achieve things I might have thought I could not; my intense need to ‘sort something out’ has benefited my patients on more than one occasion and my drive to find a solution to some intractable problem or other has served me well.

On the other hand, at least in my personal life i have not listened enough to that small voice saying ‘hang on, is this  a good idea?’

When I got married, barely a year after I had met my husband-to-be, there was a small voice telling me that I should not do this. I ignored it. Through therapy I have come to understand a little more about why I ignored it, to recognise the strong internal drivers that led me to that position, and to forgive myself at least partially for the decision.

The ‘ignoring’ of the internal voice has / had become the norm for me; in part I think I drank too much to manage the persistent anxiety that was caused by behaving in a way which ran contrary to what I knew was right (for me) Right now, I am living in a way which is true to my thoughts. I’m not acting in any way that makes me feel deep down uncomfortable. Its much more restful, though my intention to live according to my thoughts rather than my feelings has not been significantly tested up to now.

So, looking at Gandhi’s comment… There is no mention of your ‘feelings’ in there. Rather an emphasis on beliefs as the starting point… which, in general, are formed after some thought; are based on solidity; are perhaps less transient? 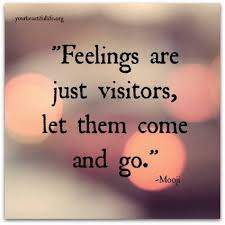 Maybe this is the key? Hold on to beliefs, opinions that have been formed after thought, internal interrogation., informed debate… and try to observe feelings as an impartial onlooker… noting them, but not responding..

doe any of this make sense? I love some parts of my ‘new life’; I love feeling harmonious INSIDE, but I’m aware that my emotions are sparked by the littlest thing, and the strength of them is a little frightening …