Yesterday I was lucky enough to be asked out ‘painting’ by a chap I had met the day before. People are pretty friendly here, and everyone greets and chats with you. On Monday afternoon I had been sitting in a cafe by the beach, and sketching, I had ordered a becks blue and lime, despite having a very strong urge to buy a bottle of wine and drink it in the sun. I was drawing, erasing and cursing under my breath when a lady came over to talk to me. She asked if I was an artist (though it must have been obvious from my poor drawing that I am nothing of the kind!) we chatted for a few minutes and then she went back to her partner.

Ten minutes later a chap came over to me,  Looked over my shoulder, sucked slightly through his teeth and said something along the lines of “are you having any trouble?” I admitted that I was struggling with the perspective , and he asked for my pencil, sat down with me and redrew my vista with perfect accuracy. Each part sat exactly in the landscape where it belonged, and the composition was pleasing to the eye. We chatted, his wife joined us and we had another drink ( interestingly my desire to drink disappeared as soon as I had company) The gentleman introduced himself as an artist, painting for the island gallery and invited me to go out with him for a painting lesson the following day. Fortunately I had brought my oils and brushes, and I accepted with pleasure.

So yesterday morning we met in the island gardens at a prearranged spot. My tutor arrived with a HUGE canvas for me; a quick lesson on composition and perspective followed and we rigged me up an easel from two boxes found in the garden sheds. I learned a lot in the next few hours. It was the first time I have ever actually sat outside with oil paints and tried to capture what I saw. I learned a lot from that, but probably more from watching my tutor paint a canvas much bigger than mine. In 3 hours or so , a big blank space was transformed into an almost finished painting, drawing in not only what was actually in the vista in front of us, but some added things close by, reframing the existing picture by moving things a little – the use of artistic license..I learned a lot about colour, about the use of light and shade and about the liberties one can take if the basics are correct.

At the end of the session, my painting, far from perfectly executed and annoyingly still imperfect on the perspective from was praised by my tutor and his wife, that praise meant a lot to me because it was honest ” it’s a lot better than yesterday” commented the artist, and his wife added that I had managed to get a great deal done in a short space of time.

As we parted, my tutor said to me that I must just keep practicing .. that he had been painting for longer that I have been alive, and that painting the subject he had chosen had not been 100% easy for him either. ..

I’ve been thinking about that. Several days this week, on holiday without another adult, I have been quite tempted to drink – well I have wanted to drink, or wanted to be able to drink, or thought nostalgically about drinking or something… I remember how hard it was in the early days to shake that off. How hard it was to remember the very valid reasons I decided to stop drinking. How I had to really concentrate to ” play the tape to the end” ….it’s much easier now. I don’t have to “argue ” in my head, I automatically fast forward the decision and picture myself at the end of the evening / the next morning … oh yes, practice at this has really really helped  and the last 445 days of not drinking have given me lots of practice …

So I’m still sober, not smoking (since I got here last Saturday) eating much better, and generally pretty much ok. My perspective still needs some working on… but all I need to do is practice! Right ?

Oh and when it’s finished, I’m going to buy that painting my teacher did as a keepsake of a wonderful day … and as a reminder to just keep trying 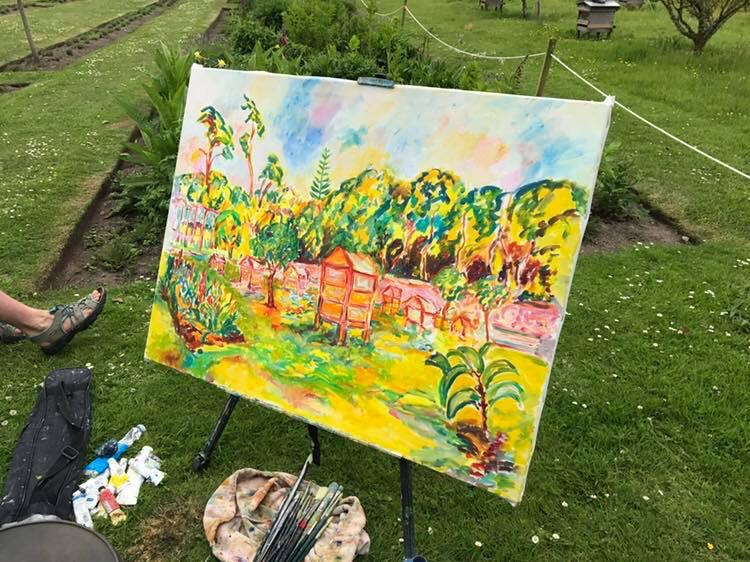