I was reflecting on This post that I wrote some months ago.

And I have been reflecting on what happened when I tried to rekindle my relationship with my exP (in a limited way) back in February /March.

In the latter case, even though, in some ways I really wanted to be with him, and I felt ‘love’ for him, there remained a huge cognitive dissonance in my heart / gut that I was aware of but could not identify. This led to some mood swings on my part, and baffled him. To be honest it rather baffled me. I know now what that was about. It was about my boundaries. I had supported him for 5 years, and run up significant debt doing so. When I begged him for help to sort it out – ie earn his own money; he refused. I can and could never get past that. I tried to stuff it down but it remained in my heart and reminded me – in an oblique way that seeing him, being in any kind of relationship was wrong for ME.

Now i know that is my boundary. he crossed it, and I can never forgive it.

In the post above I refer to I was trying to sort out how to respond to an apology from my ex husband. I was trying to capture my feelings about the apology, and how I could react in an authentic way. I recognised that my former ‘way’ – accept the apology and move on, burying my feelings of hurt, anger and resentment, was not the answer, but I did not know how I could manage my feelings and respond in a constructive but truthful, again authentic way.

I am very aware that my relationships with these two men have many similarities, in that in both cases I was a victim of domestic abuse, and in both cases I tolerated unacceptable behaviour for far too long. The difference is that I have children with my ex husband, and for their sake I cannot completely sever relationships and never communicate with him again. So how to set a boundary.

Now I feel it would have been completely appropriate for me to send him an email, expressing my anger, and to some extent my resentment. It would have been completely acceptable for me to say ‘ I will not tolerate you abusing me in this fashion’. I would not need to be insulting or abusive myself, merely clear about what I will and will not accept from him. I can set a boundary, and expect it ( no demand it) be respected.

This s very interesting to me. Its a huge personal development. I can set MY boundaries, I do not have to just accept what others do or say TO me. I can say that it is not acceptable to me to be called a F*** C*** . Thats it. Clear, and set the consequences.

I have mentioned my eldest son has been aimless and smoking drugs, in the kids den at the end of our garden. I did not mind him having friends to stay, I accept that many of them smoke cigarettes and weed ( although I dislike the latter intensely) The boundaries I set , with each guest – so that they knew the rules were MINE and not on 1’s were

Two weeks ago, I was in the Den with son no 3 who was having a friend over., There were cigarette butts stubbed out on the floor, rizla papers, tobacco and bags and bags of empty weed packets.

So I  told son 1 that none of his friends were welcome to say again. End of. I gave them my boundary, explicitly. And they disrespected me. So no more. It feels good. He is disgruntled, but cannot complain.

Son 2  ran up a huge bill on his phone ( data roaming) I told him, again explicitly, if it happened again I would take away his phone and give him one with no internet access. Today his bill arrived, again grossly over the 7 GB data he has available. So When he returns on Saturday this is what I will do.

Boundaries. What will I accept and what will I not? I am 100% calm about the whole thing, there is no shouting, no anger, just clarity and consequences. In fact when you ARE very clear, there feels no need for anger.

I am growing up. Growing into myself as an adult woman. 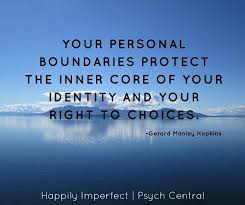