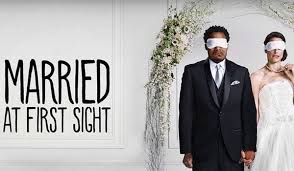 This ridiculous programme has just had its third series aired in the UK. Reality TV at its most intrusive. For anyone who has not seem this, the participants are ‘matched’ following a series of psychological emotional and spiritual examinations by ‘experts’.  They then meet at the alter in full wedding regalia and legally commit to marriage within 2 minutes of meeting each other. The only criteria for participation I believe is that you must have not been married before, have no children (and be a bit desperate). Apparently thousands of hopefuls sign up for each series, and the final selection of three compatible couples is the subject of the first programme in the series. The programmes follow the hapless couples though the selection, pairing, wedding,honeymoon and 6-8 weeks of ‘living as man and wife’ before asking them to decide if they wish to stay married, or seek divorce.

The programme airs in The UK , America and Australia, and it’s interesting to compare the cultural differences and expectations in participants from different nations. To some extent they seem to conform to stereotypes- the Australian weddings and more informal, often outside; the American couple relationships with the ‘experts’ are much more involved, the Brits seem closed and superficial in many ways. Maybe it’s just produced like that.

The most interesting h part of this programme for me is watching the relationships develop, positively and negatively. I’m aware, of course that what we are shown is a tiny  snapshot of thousands of interactions both on and off camera, but there is a wealth of ‘stuff’ to interest me.

1. The ability to articulate your feelings in the moment is really valuable. If you can do it in a non critical way, using I statements, even better. Watching the build up of unspoken resentments is quite painful, and extremely damaging to developing relationships.

2. Knowing who you are, what you need and what you will not tolerate – this is essential. More than one union crashed at least partly because one partner was not honest in the beginning about what they needed. The woman who said she “didn’t mind if a man smoked occasionally” turned out to mind very much indeed. The man who said he would be happy to relocate for a partner – well he wasn’t. End of relationship right there.

3. If you keep your ears and eyes open you can spot an emotionally abusive man almost at the beginning. In the American show, a man who called his wife’s tattoo ‘trashy’ ; I saw it straight away – not in that comment, but in the way he reacted when she said that the comment had upset her. This cheered me a LOT. Not of course that he turned out to be a volatile, abusive, cheat, but that I’m pretty sure if I was ever in such a situation again, early in dating, I would walk right away. I have learned something !

4. Happy relationships develop when both partners are generous. With their time, their thoughts , their effort. When both partners are honest, kind but honest. Another relationship portrayed a man , trying so hard to connect with his aloof spouse who bleated how she felt ‘awkward’ and ‘uncomfortable’ (what do you expect if you marry a stranger and refuse to talk to him? I know, judgey pants, and I don’t know all the facts) That one went down the pan very quickly . Sadly another woman who took blisteringly honest communication to the other end of the spectrum alienated her husband so completely that, although she ultimately fell in love with him for his many qualities, he decided not to stay with her.

Trash TV? Definitely. Unrealistic – yes of course. But I have learned quite a lot from watching – and that’s all good