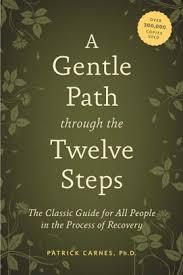 In the last couple of weeks, as my step work has progressed, I have been introduced to this ‘personal craziness index’.

This can be found in the book above that I have been working through. Essentially it distills the character defects, painfully worked out through my step 4 inventories, identifies (lots of) behaviours that arise from these and suggests you chose the seven most ‘measurable’ on a day to day basis. Specifically those that indicate emotional disequilibrium…

So on my list are things like ‘messy bedroom’, which comes from my tendency to procrastination and a recognition that for me, a tidy and clean personal environment indicates a degree of emotional stability. Others include ‘irritability with kids’ – again when I’m feeling stable and robust (and not over dramatising) I’m better able to manage the normal ups and downs of life with three teenagers; messed up eating patterns ( a nod to the long standing, and now intermittent, craziness of my food intake) and absence of mediation / prayer/gratitude list … again, when I’m emotionally ok, I make time for these things … and I recognise that they are important for me.

At the end of each day, I add up the number of ticks in the boxes, give myself a score out of 7 for personal craziness, and jot it down. It’s a pretty accurate reflection of where I am.

I going to offload a bit here, because it helps me to write this stuff down..

Firstly the kids. Son1 is home; after an aborted attempt at a conciliatory chat on Saturday (he stormed out) he returned in a much more reasonable frame of mind on Sunday. He accepted that he had broken the rules, and that part of my frustration with him came from his lack of contribution to any tasks in the home. He’s been much better since then, has cleaned up after himself, cleaned the kitchen and generally been a lot more helpful. I agreed to lay off the ‘get a job’ pressure for a week .. result a much more harmonious relationship. So much for son1 (for now)

Son3 is really no trouble. Hes been watching, a bit wide eyed, at the strife – and I can see him listening and learning. He gets himself up for school, is oi his homework, has submitted with reasonable good grace to the removal of his gaming computer during the week and is generally low maintenance. So much for son3

Son2 is the focus of stress right now. Is this me ? I don’t actually think so. Last week he failed to attend school /college on Friday when he had opted not to attend an optional team building day at Go Ape (for anyone who doesn’t know this is an activity center which involves swinging though trees / high ropes and activities up in the canopy) For a kid with a long standing discomfort of heights, not going seemed reasonable. What he neglected to tell me was that he should, therefore have attended normal lectures. He didn’t. He then missed his private maths tuition in the afternoon which he ‘forgot’ despite my reminding him twice during the day. This cost me £40 for nothing. Yesterday, after a massive tantrum he failed to turn up for his scheduled sociology lecture, which resulted in school phoning me and informing me that if he missed on further class he would be asked to leave.

He has adopted his older brothers mantle of lying in bed all day, amidst a jumble of dirty plates, clothes and books all over every surface and the floor.

I am very busy at work and simply not there all day to insist he clears up. Today I told him that if the space is not clean by the time I get home, I will confiscate his phone for a week. Lets see what that achieves.

Last weekend I received a bill from son2’s private psychologist for £920. I was expecting £345. Plus a ‘bit’ . She charged me 1.5 x normal rates for a shed load of work she did (unasked) in August… she never informed me she would be charging me 1.5 x normal rate (which is £125 /hour) nor did she offer me the option to defer this till September nor did she give me any indication of the costs accruing. I raised these issues with her and got a  flat ‘this is the bill, pay it’ response.

Stuck between a rock and a hard place. Son2 likes her, he trusts her. She has been working with him for 6 months. I am very loath to disrupt the therapeutic relationship. BUT I feel she has been unprofessional and disingenuous and I no longer trust her … certainly I don’t trust her to be transparent about her charges. I’m very angry and very frustrated, but I’m mindful that I have a tendency to both overreact and paradoxically to minimize. so I have no idea if my reaction is reasonable. And that stresses me still further.

I know I should be happy that I’m sober. I AM happy that I’m sober, and I know all of this stuff would be harder if I were not. i just feel I’m lurching from one crisis to the next, clinging on with my fingernails and trying to create the order Im desperately seeking out of the chaos that is my lived experience.